Have you hugged someone today? 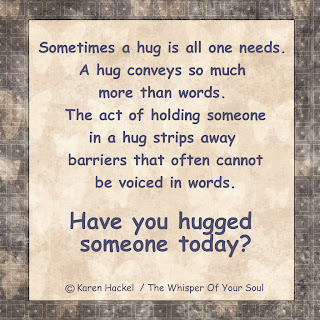 Sometimes a hug is all one needs. A hug conveys so much more than words. The act of holding someone in a hug strips away barriers that often cannot be voiced in words. I didn't always love hugging people despite growing up in a family where hugs and kisses were frequently given. Everyone hugged and kissed at family gatherings - both when arriving and departing.

I guess I never gave much thought to the value of a hug. The past few weeks I seem to have been hugging many people. Recently it was the anniversary of a friend's son's passing and when I saw my friend I gave her a hug and held her for a long time while she cried. Afterwards she thanked me and remarked that the hug helped. There were others I hugged; a person recently diagnosed with cancer, another who recently lost his job and a friend who I hadn't seen in awhile.

Then yesterday I gave away another much needed hug. A friend's engagement was called off and he came  to talk. When I saw him I hugged him for a long time. Initially he pushed me away but I kept holding him. After a few minutes he released from the hug and commented how he really needed that hug.

I thought about how hugs are free and yet so many people have lost the art of hugging. I remember how Princess Diana was so liberal with all her hugs and how she touched so many lives. Hugs are truly so easy to give away, they feel great and I think the more one hugs the easier it gets to give out hugs. Hugging truly is priceless and I believe we all need to start hugging more.

My question to you - have you hugged someone today? 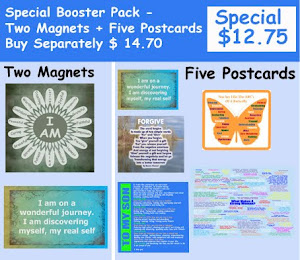 If you like this blog, please consider buying me a cup of coffee? Thank YOU